13.2 Example of the Building the histogram

Sections of the document

The image in the photo is bright and contrast enough by default. Brightness and Contrast indicators in this case have average parameters, 128 units.

Let us try to change the image in the photo by having raised the brightness value, for example, up to 178 units.

The image in the photo in this case becomes lightened.

Changing the brightness parameter (making it greater or less) we move the histogram right or left respectively. 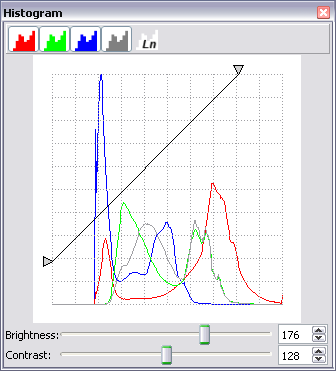 Let us reset the alignment settings and change the contrast, having changed the value of the contrast parameter, for example equaling to 78 units. The photo which was received after such editing has low contrast. That means, in shadow parts of the image there are few dark points, and in saturated light parts there few light ones.

Changing the Contrast parameter we cut the brightness levels (white in the right and black in the left). In the first case we make the image more contrast, soothing the shadows by that (darkened image), in the second case — vice versa (lightened image). 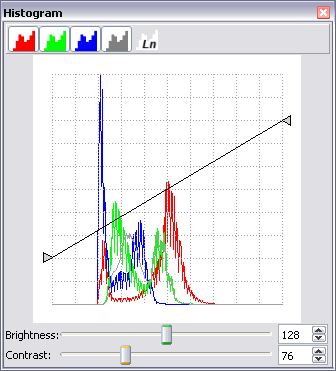 If our products do not solve your problems, we are ready to develop "from scratch" or modify existing applications.

Tired of the slow camera work? Keep up with progress! The camera on USB 3.0! operates at a speed of up to 180 fps.